Oriental stair runners can be a great way to showcase your stairs and make a statement in your home. Sam Presnell of The Rug Gallery talks about how to choose an Oriental runner for your staircase.

Do people use Oriental rugs as stair runners?

Sam Presnell: Yes, a lot. Mostly it’s for the people who have wood treads on their steps, so if you’ve got steps where it’s wall to wall carpet and there’s no finished tread on there for runner, you definitely wouldn’t do that application.

John Maher: Right, if it’s just plywood down on the stairs, you’re not going to cover that with a nice rug.

Sam Presnell: I would think it depends on the quality of your home. Usually a better quality made home will always have wood treads or if it’s an old home, I can guarantee you have it. You just probably would have to remove the old carpets that had been installed wall to wall, but I would say I think homes prior to 1960s, you probably have hardwood treads that at least you could refinish.

John Maher: Okay. What is it about stair rugs that you think make a statement in a home?

Sam Presnell: I think one is that you can expose two things like putting a frame on a picture I would say, so if you can imagine, you have a picture and then a pattern design like a rug, and then you put a nice frame or something that has some contrast to the design, and it really stands out.

There’s not much you can do to stairs, but a stair runner is one of those things that you can really do to improve the interest to a staircase and also will be something that can perform and look good with wear and tear. There is that kind of difference when you put a nice pattern, rug or colored rug on your stairs as well.

How to Install Oriental Rug Runners on Stairs

John Maher:  Right. How are they installed? Are there sort of stapled, or nailed or tacked on? How is it that they adhere the rug to the stairs?

Sam Presnell: I mean there’s always exceptions to everything, but I would say the majority of them we use tackstrip just like we do in a carpet installation, but you don’t see it because we cut it less than the runner, about an inch and a half on each end less than [the runner], so you don’t see it sticking out and it’s basically up against the riser on the step at the very bottom of it, and also where the tread comes across.

There’s a low gap in between there. We pound the carpet into that gap and it attaches to those little nails that stick up.

There are different type of tack strips that we use on staircase because you don’t want that nail coming through and getting the heel of the foot or something, so we have different heights that we can buy as far as nails to make that work. That’s how we do most of them. Some of them we have stapled. If we do a, what we call, Hollywood step or an upholstered step, we would definitely staple those kind of things.

John Maher: Is it safer do you think, to have a rug on a set of stairs rather than leaving the stairs just plain wood where it might have the tendency to be a little slippery?

Sam Presnell: Yes. I’ve seen some serious accidents happen over the years. People coming down with their socks, mostly kids. It seems like we see accidents happen because they’re so non-thinking and they’re fast, and they’re coming down steps or running down the steps and they’ve got socks on their feet and all of a sudden, it’s down they go, and believe me, those stairs are hard and they hurt and there’s a lot of force when you’re going down that angle.

So definitely the carpet gives more gripping to it, it’s softer, it’s less noise. I go on and on about the attributes of having a nice runner on the stairs as opposed to doing wood. Now you do get an effect of a wood floor that’s simplistic, that’s really cool, but as far as safety-wise, definitely it gets better with the rug or a runner.

John Maher: What do you think the best choice is for stair runner sizes or styles for a house?

Sam Presnell: Well, I always try to go with what I call a “Sam Presnell rule” and I’m not sure where I’ve read this or if anybody else does it, but I think we all kind of do the same things, and runners come in set sizes, but we can adjust those by sawing them or cutting them and doing different things to make them different sizes, adding to them, but usually I’d say I add about four to five inches on the width of the runner.

It’s about what you want to expose a wood floor tread over the runner size. So if we have to make a wider, we’ll get to that as we do, but that’s usually kind of what I would call an idea of what to put on as far as space on a runner.

John Maher: Give me an example of a sort of standard with a staircase and then how wide the rug or runner would be.

Sam Presnell: Standard stair cases use about 39 inches. Basically, from the inside part of the, what do we call that part that goes up the steps, the side part of it, the wiser part of it, and then on the other side where we usually have the spindles. It’s about 39 inches. So a 30 inch runner would give you a four and a half inch reveal on each side.

So that’s pretty standard and 30 is pretty common, defined. If you have a 36 inch step, a lot of time we’ll use 27 inch goods, two or three inch goods and that gives you about that same proportion again. I think it looks quite natural and the best from my way of thinking.

John Maher: So leaving a four inch gap on each side of the runner is the way to go. Yes. Okay.

Sam Presnell: Under my suggestion, yes.

Sam Presnell: All right John, my pleasure. Thank you.

John Maher: For more information about Sam, The Rug Gallery and Oriental rugs and carpets, visit [theruggallery.com] or call 513-793-9505 and make sure you catch the latest episodes by subscribing to this podcast on iTunes and if you can take the time to give us a review on iTunes as well, we would appreciate that. I’m John Maher, see you next time on The Rug Gallery. 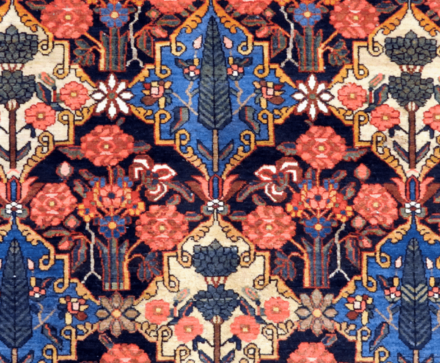