Why All Wool Rugs Are Not Created Equal

How Common Are Wool Rugs?

John Maher: Sam, today we are talking about wool rugs and why all wools are not created equal. Sam, is wool the most commonly used material for rugs?

Sam Presnell: I would have said that 20 years ago, but not today.

Sam Presnell: It’s hard to really say what that number is. I’d have to do a lot of research [that] I’m not inclined to do sometimes, but it seems to be like the synthetic fibers are beginning to really take hold and there are some really great looking products made with synthetic fibers these days.

John Maher: Okay. What is nice about wool rugs, though?

Sam Presnell: The best thing about wool is I always say how they look long term, so I guess the best way is to describe wool if you look at it under a microscope is that it’s built upon cell upon cell. It’s like your hair and skin are made. It’s a natural process that’s inherited. The [proteins] just stack up on top of each other and you get kind of a scale like you would on a fish. As a wool rug wears or it goes through a wear, basically it’s just loosing scales.

You will see that wool does shed. That’s a very common characteristic [and why] a lot of people get scared to death of that wool. “Hey my rugs falling apart, it’s shedding,” because they have synthetic rugs that don’t shed like that. Whereas when you look at synthetic fiber under a microscope, it looks like a glass rod. I mean it’s smooth, clear [and] just looks like a paint on glass, you can see right through it.

What happens as you wear that glass rod, you can imagine you are taking grit from your shoes and from the outside in the sand and you are just grinding that nice clear surface. I would say imagine [taking] a piece of sandpaper to it and eventually over enough time, you won’t be able to see through that clear glass anymore. It becomes, what I call, frosted. Maybe something you would use in the bathroom basically, so you can’t see through it.

That’s very, very common to see [in] a synthetic carpet. Basically you can’t wear them out. They are un-stainable, which is really nice, but basically what happens is they dull out and get ugly. You can’t stand to look at them and you keep thinking they are dirty, you have people come in and clean them. They claim “There’s no dirt here,” and you’d swear to God it’s a bad cleaner, but really, it’s the way that that nylon or synthetic or polypropylene fiber is wearing and on the lighter colors it’s more obvious than on some other colors.

You will see that as a very common characteristic. Whereas wool pretty much looks like the rug or carpet that you bought until you wear it out. Same thing with clothing. If you buy a good wool suit compared to a polyester suit, you are going to keep that thing a lot longer and it’s going to look more like the original piece of clothing that you bought.

John Maher: Okay, interesting. Are there different types of wools as well?

Sam Presnell: Oh my God, yes. I think that’s the biggest misconception is that people [have who] are not in the business. They think that wool is wool and that’s the farthest thing from the truth. There is really great wool out there that will wear like iron that’s fantastic, and then there is some really bad wool out there that is not going to perform in high traffic situations. It’s wool, but it’s not made for performance. It will be short stapled and basically, when you are taking short pieces of hair and you try to mingle that together, it doesn’t want to cling to it and it tends to come apart in sheds.

If you rub a rug really hard or a carpet really hard and you get a lot of residue on your hands, you probably have a short staple carpet. If you rub something really hard and your fingers get a little hot and sweaty and shiny, that’s probably a good piece of wool because there is not much shedding coming out. Rugs and wool can vary greatly and I think most people think they are all the same [when they are buying wool] and it’s really a disappointment to a lot of people who buy really inferior and bad wool.

It’s just one of those things that people get really disappointed [about] and then I usually have to come in and say “You got what you paid for,” and believe me that’s the last thing that they want to hear, and so I should never ever say that to them. That’s kind of what I’m thinking most of the time.

Where Wool Rugs Come From

Sam Presnell: It is and it’s also by the sheep and how they are bred and then where they are from, how their diet is, how they are cared for, and how often you shear them. So many countries are under stress to basically shear more than twice a year. They’ll sheer three times a year just because they need the money. A lot of places that are in the Middle East are in a very arid climate, so they don’t really have the beautiful grasslands that we have here in America.

They have very sparse situations with really bad grass for sheep and they have to go long distances in order to keep them. How do you care for them health-wise [in that situation?]. Some sheep, the wool on them, are made perfectly for rugs, and then some of them would not do well on a rug.

Look for wool from New Zealand

I always tell people to look for the New Zealand brand wool, because New Zealand has made it into more of a science where they’ve done a lot of research and where they’ve bred sheep for the wool quality. If you have ever been in New Zealand, you know how green it is. They have great grasslands. They don’t have a lot of weeds in their grasslands, so it keeps a lot of those burrs and stuff out of the wool that you don’t have to pick through, and they really have the cleanest, whitest wool.

So when you are making a rug and you want to keep dying it over and over again to produce that same color, you’ve got to start where the product is very consistent and very much the same. You’ve got to remember wool is a natural material, so it’s like people and everybody’s hair is different. You’ve got to be careful there.

Best Type of Wool for Rugs

John Maher: Any other thoughts on the best types of wool for rugs?

Sam Presnell: I would say that’s probably it. I always look for the New Zealand brand. I think that’s the ultimate. It doesn’t mean there is not good wool [elsewhere], and we get a lot of good wool from Nepal, from Tibet, from China, and the climate [in China] is really great for really long, indigenous wool and that wool has been used for rugs for thousands of years. It’s incredible.

There are always pockets everywhere in the world where the sheep are made for rug making, [including] Iran, Southern Russia, we see a lot of that from Turkey. We see it all around the world, but England has great wool, Ireland has great wool. Some of it is better for clothing and some of it is better for rugs and carpets, but I would say the one brand you can be assured of is that fern mark on the label.

John Maher: Okay so the fern mark on the label will indicate that the wool came from New Zealand?

Sam Presnell: Correct. That is their brand, the trademark. That’s why I always tell people that a lot of people say that it’s New Zealand wool when it isn’t. I mean it’s hard to tell if you don’t see that brand mark on it. You can’t really swear that it is that, so a lot of people don’t, assuming you have to pay for it. There is a lot of research and tests that they have done to make sure that wool will perform. That’s one thing I do like. If you want to put a carpet out or a rug out with the fern mark on it, it’s got to be tested first, and so there is due diligence as far as the wools in New Zealand go to make sure that part is going to perform as a carpet or rug.

John Maher: All right, great information. Sam, thanks again for speaking with me today.

Sam Presnell: All right John, my pleasure. Thank you.

John Maher: And for more information about Sam, the Rug Gallery and Oriental rugs and carpets, visit ruggallerycincy.com or call 513-793-9505. Make sure you catch the latest episodes by subscribing to this podcast on iTunes and if you can take the time to give us a review on iTunes as well, we would appreciate that. I’m John Maher, see you next time on the Rug Gallery. 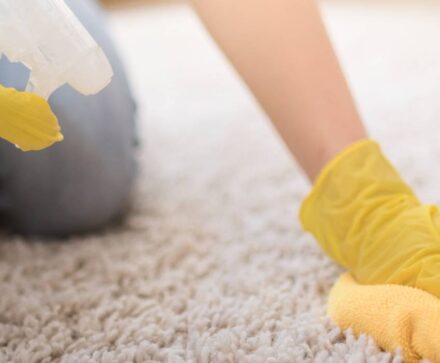 How to Spot Clean a Wool Rug