John: Sam, today we’re talking about Heriz and Serapi rugs. What is a Heriz rug?

Sam: Heriz rug is actually a name of a town or an area or village in northwestern Iran. That’s basically the main area where rugs are traded. Basically, a lot of the names you see in Persian rugs are actually names of cities or towns or villages.

Differences Between Serapi and Heriz Rugs

John: Then a Serapi rug. What is that and how is it different or similar from Heriz?

Sam: Serapi. Well, actually there is no town called Serapi. A lot of people get confused about that. They think it’s in a particular area. It’s in the same area basically, but the difference between Serapi and Heriz is the fineness of the weave. You have a much finer woven in Serapi. Much, much finer.

Heriz and Serapi Rugs Versus Other Types of Rugs

John: What makes this type of rug different from other types of rugs?

Sam: I think it’s the design. I think they’ve really hit on a design that’s become timeless. It’s one of the few rugs that have really stood the test of time and [are] still popular today as it was 100 years ago. Very few things you can say that about design-wise, especially in our business. Such a fashion-forward business that something can withstand that amount of time and still have the ability to sell. It’s really just a beautiful design. The best way to describe it is—there is other types of Serapis so don’t get me, there’s a 100% this is … everything is this way but it’s 90% probably what I call explosive geometric medallions in the center of the rug that just fans out into the corners. Then, there’s just this corner medallion [that] are basically the same … that arc very geometric and that’s kind of, that’s the way to describe it verbally.

Sam: Yes, again 95% of the time Heriz is red-navy, no question about it. That’s very common. You have different shades of those colorations but that’s very common and very popular and classic.

John: The other colors or things that the Heriz and Serapi rugs come in?

Sam: The rare ones are the ivories, especially with Serapis. You will find a few ivory Serapis and those bring in the megabucks when you do because they are so unusual.

Where to Place a Serapi or Heriz Rug

John: Interesting. What rooms in my home should I use a Heriz or Serapi rug and where does it look nice?

Sam: Well, I think it’s one of those rugs that just fits everywhere. I see it used in every room in the house and it’s beautiful in every room. I’m a big fan and I don’t think it has to be a certain way. Being that it’s geometric, it fits nicely with very casual looks as well as beat-up furniture or even shaggy-chic type stuff and also beautiful with antiques as well. It’s a very unique rug as far as its adaptability to look great in so many different situations.

John: You mentioned that the Serapi rugs have a more fine weave. Does that make them a little bit more expensive than the standard Heriz rugs too?

Sam: Yes. There’s more than a little bit expensive. It is very expensive because of the rarity of them. If you find one in good shape they are bringing huge dollars. I try to put a percentage on it, but if you have a Heriz they are more like an everyday type of rug you would find in the market. Very common, mass-produced. But a Serapi is not like that. It’s more of a collectible and you can find them anywhere between tens of thousands to more than six figures rugs sometimes for a big one.

John: Any final thoughts on Heriz and Serapi rugs?

Sam: Well, my big thought is that I just think it’s just one of those fantastic rugs. If you own one it’s a great rug to own it’s very popular. Usually, if there is anything that you can return value to what you spent, they are one or a few rugs maybe that you can do that with.

John: All right. That’s great information, Sam. Thanks again for speaking with me today.

John: For more information about Sam, The Rug Gallery, and Oriental rugs and carpets, visit [theruggallery.com] or call 513-793- 9505. Make sure you catch the latest episodes by subscribing to this podcast on iTunes, and if you could take the time to give us a review on iTunes as well, would appreciate that. I’m John Maher, see you next time on The Rug Gallery. 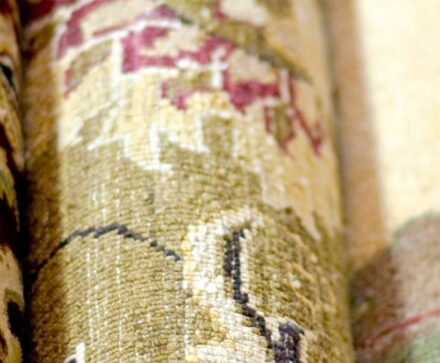 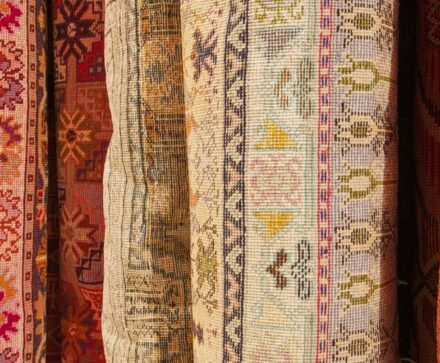 Ikat Rugs: What You Need to Know